I’ve missed just one month of the Garden Bloggers’ Bloom Day ritual and I’m already going into withdrawal. Unfortunately, we’re now thoroughly frozen and snow-covered here in southeastern Pennsylvania—likely to stay that way for a while too—and I don’t even have any houseplants to coax a flower or two from. But in the spirit of using Bloom Day as a sort of garden journaling, I wanted to see what I could come up with that was worth noting from the past few weeks.

The chalky white stems of ghost bramble (Rubus thibetanus) are of little interest against a snowy background, but they were nice-looking while the browns were still around. The bright stems of ‘Bud’s Yellow’ dogwood (Cornus sericea), on the other hand, show off beautifully against green grass, brown twigs and grasses, white snow, and red berries too, like those of Red Sprite winterberry (Ilex verticillata ‘Nana’). 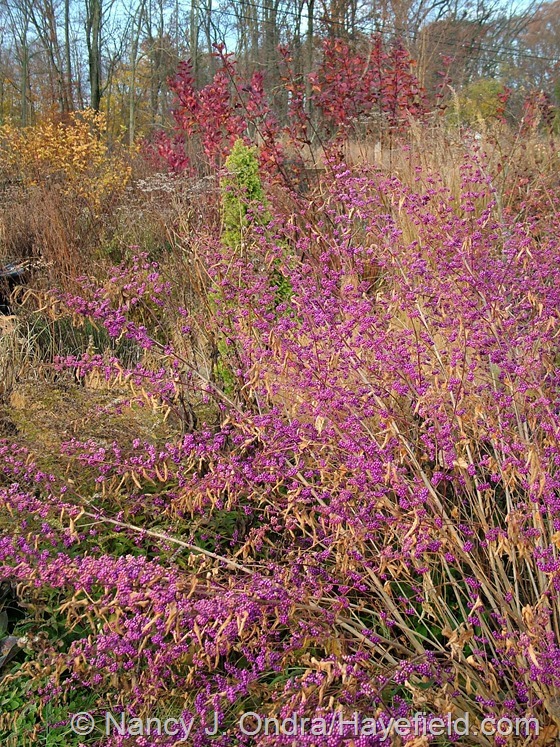 The fruits of ‘Issai’ purple beautyberry (Callicarpa dichotoma) have been particularly pretty this year: in mid-November (above) and even now, a month later, encased in ice. 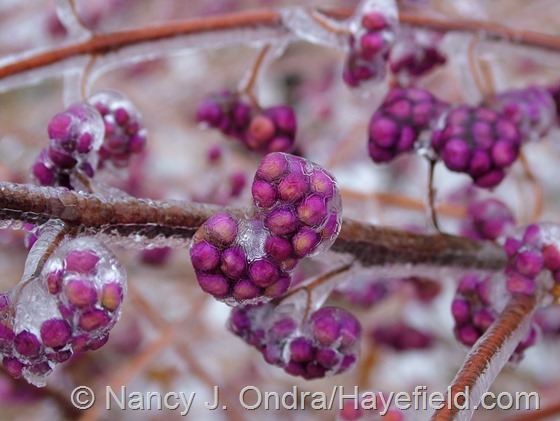 And I’m glad I didn’t harvest all of the hips from the Rosa achburensis for the seed give-away, because the remaining fruits still look great.

Well, really, what doesn’t look good outlined with ice or dusted with snow? Both really draw attention to the form of lingering seedheads, for instance. 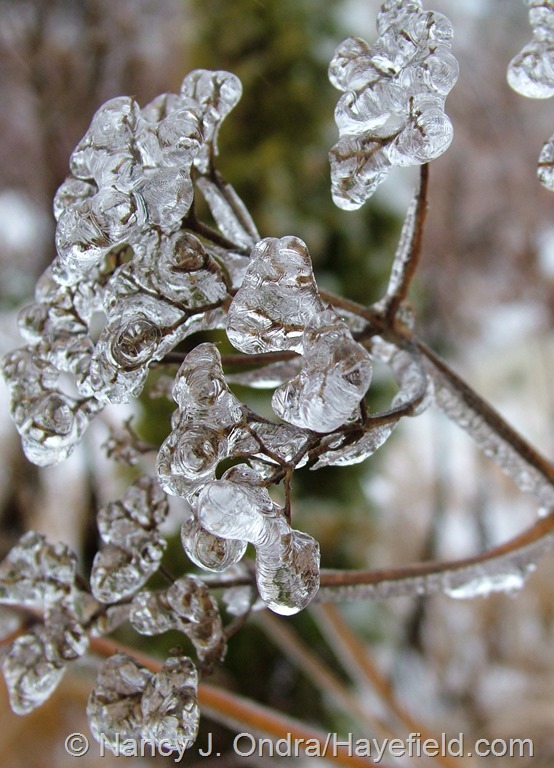 Above is golden lace (Patrinia scabiosifolia); below is ‘Crimson Beauty’ knotweed (Persicaria).

Above is New York ironweed (Vernonia noveboracensis); below is narrow-leaved ironweed (V. lettermannii). 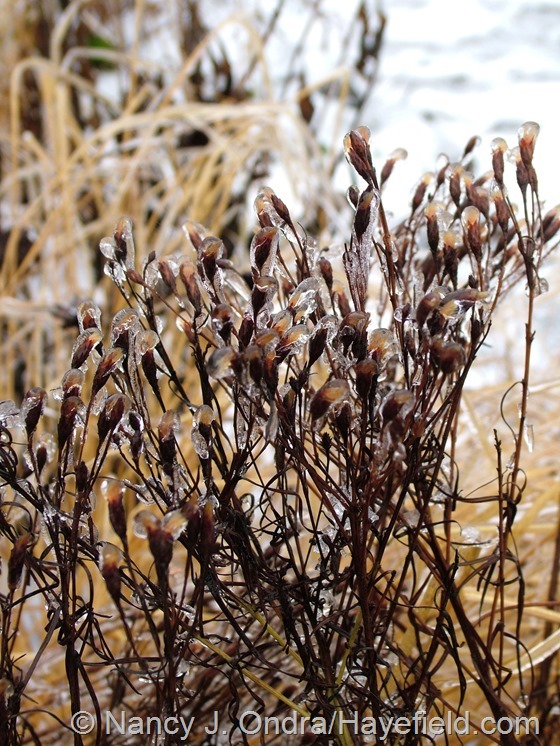 The combination of ice and then snow was hard on the large heads of smooth hydrangea (Hydrangea arborescens), but it didn’t bother the already-dangling, knobby globes of buttonbush (Cephalanthus occidentalis).

I didn’t get nearly as much garden cleanup done as I’d hoped before we got snow-covered, but that’s not a completely bad thing, because the standing stems provide a bounty of photo opportunities. Above are the sturdy skeletons of Tartarian aster (Aster tataricus); below, golden lace (Patrinia scabiosifolia). 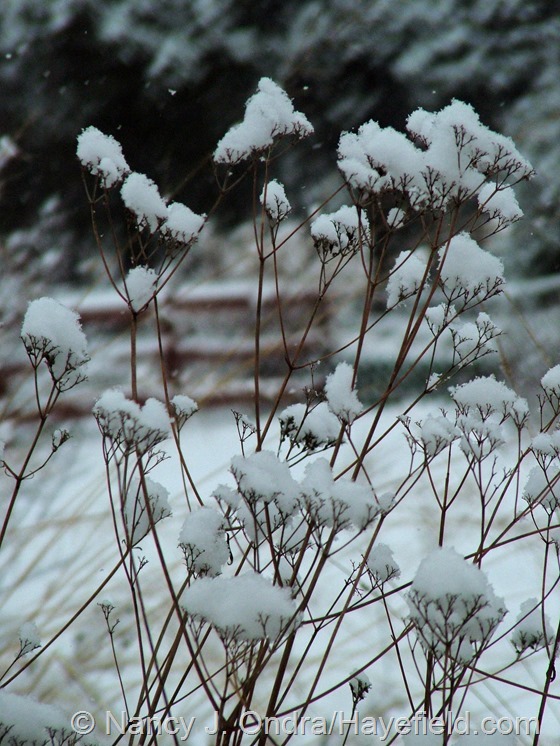 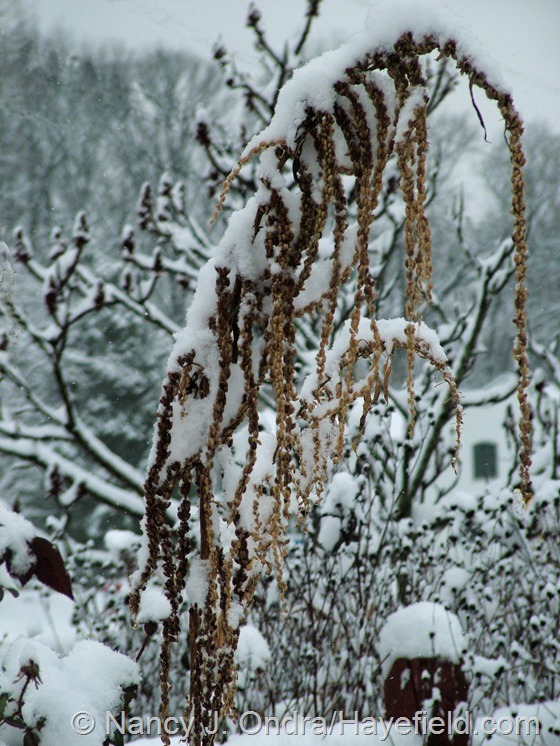 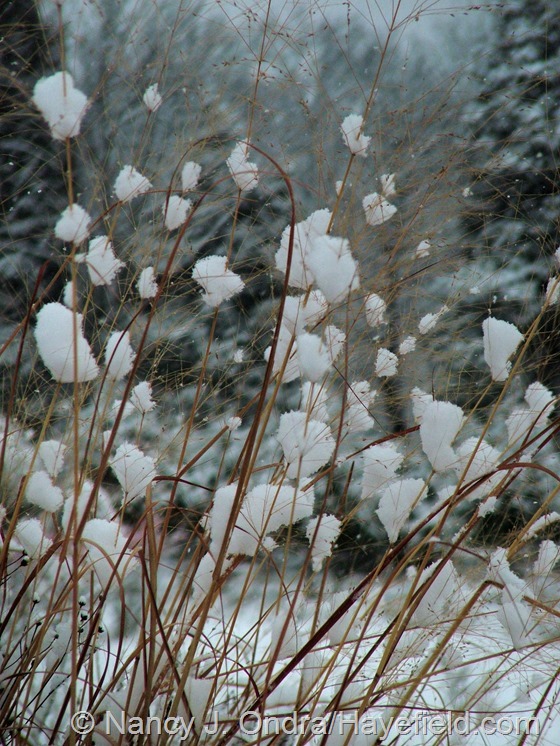 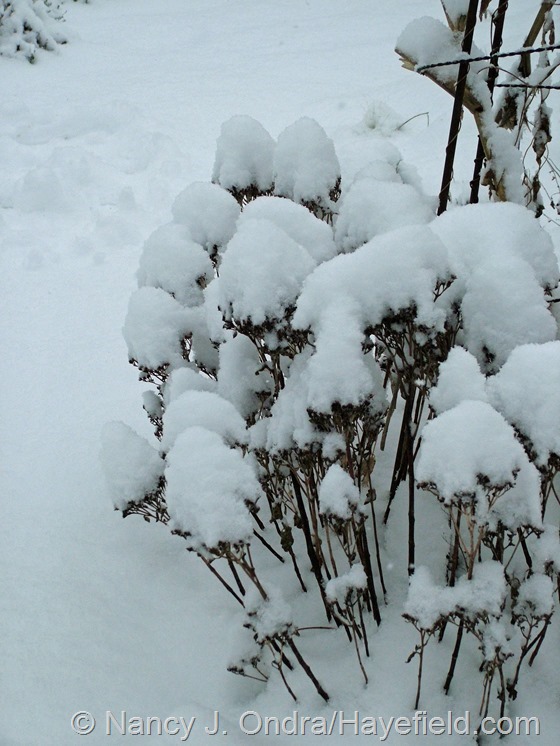 And hey, how about those handsomely branched woody plants? 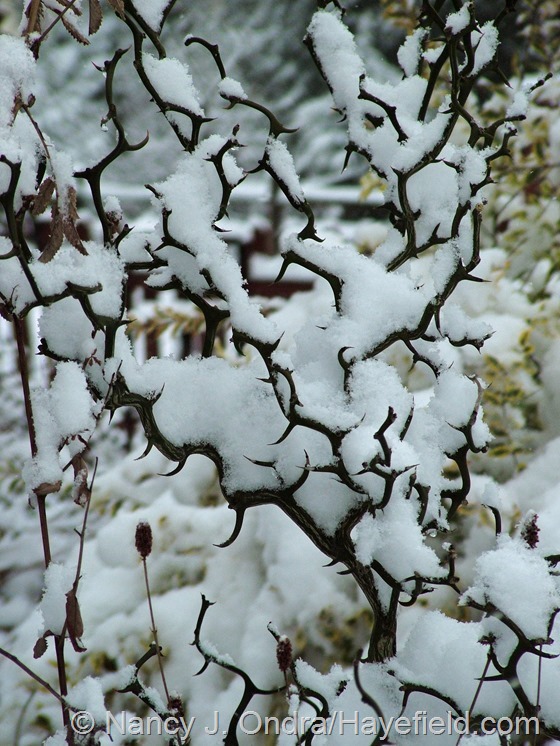 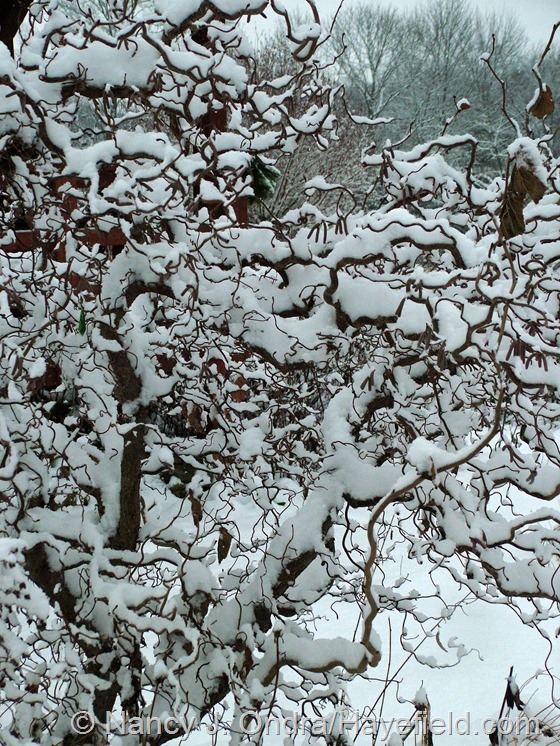 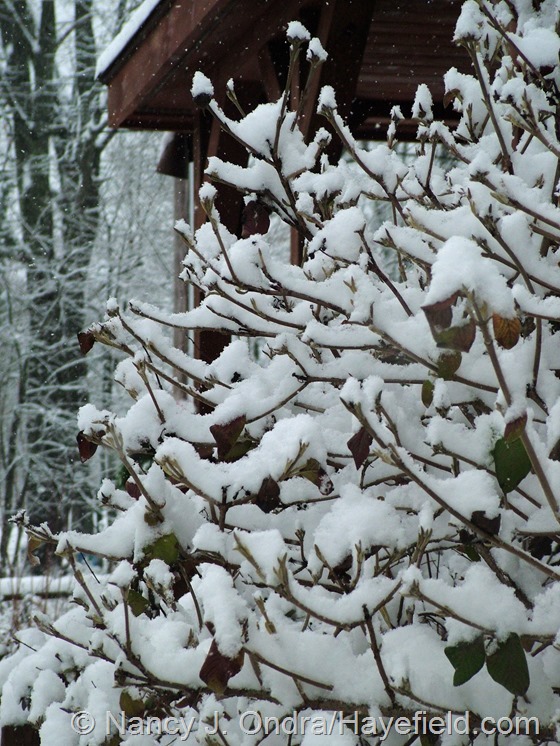 It’s also a good time to appreciate structures and ornaments that are mostly or completely covered by plants during the growing season. 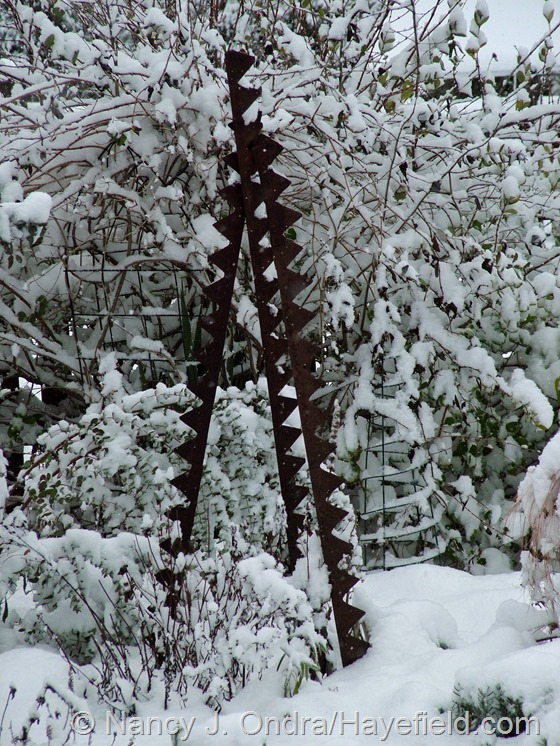 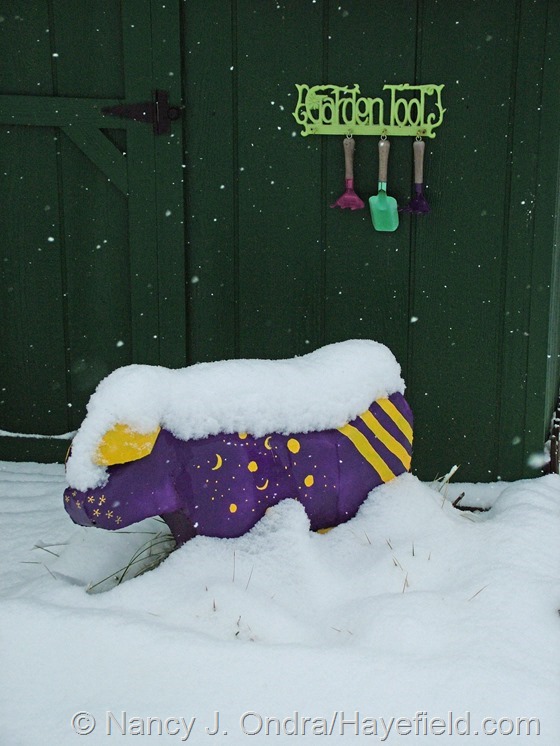 Of course, the pasture ornaments are easy to appreciate no matter what the weather.

While I’m enjoying the snow sculptures in the garden, I’m trying not to think about what’s probably going on beneath the snow cover. I did get the lower meadow mowed last month, thank goodness. 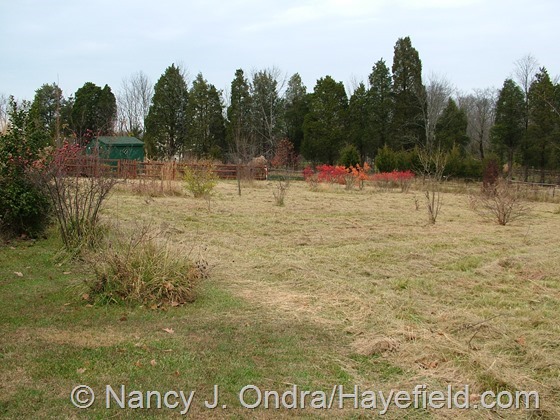 However, I didn’t get around to hand-trimming around the trees and shrubs in there until about 2 weeks later, which was A Bad Thing, because the voles love to take cover in these spots. 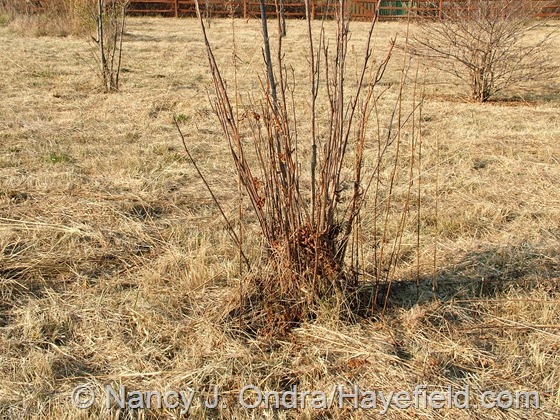 Sure enough, I found many nests when I clipped the grass away. The ground around my poor persimmon (Diospyros virginiana) is riddled with a network of tunnels.

And the bottlebrush buckeye (Aesculus parviflora), which was finally starting to look good this year, is getting chewed both below and above the ground. Sigh. 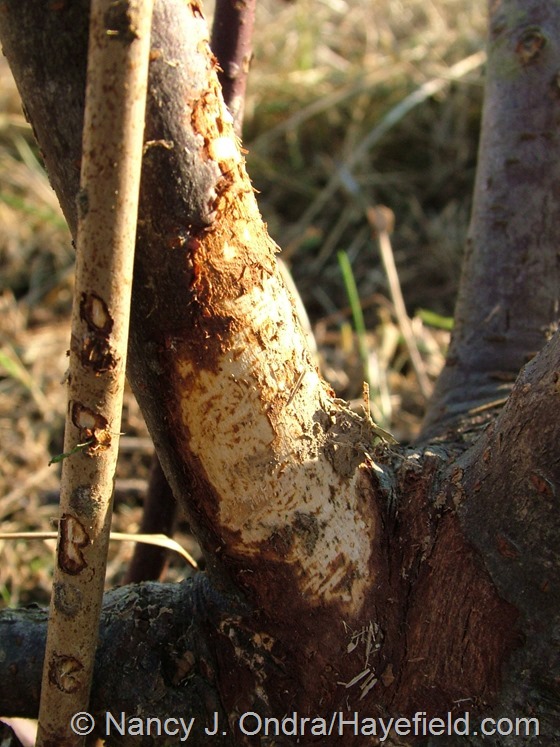 And in the main garden, these rotten little critters were (and probably still area) tunneling through the bark mulch paths to get from one border to another.

Oh, well. Maybe it’s not a horrible thing if they thin out the plants a bit, so I’ll have room to add lots of new things from the exciting seeds I’ve gathered in my treasure box. For now, I’ll just enjoy what’s here and remember how good things looked this past year.

I don’t imagine that there will be much else of interest going on outside until March, so I’ll have to come up with some other subjects to write about while waiting for some blooms to return.

Oh, there is one other thing to think about: Rob Cardillo and I have a new book coming out in March, called Five-Plant Gardens. Several years ago, our long-time publisher, Storey Publishing, approached us with the idea of a book for new gardeners and not-yet gardeners, featuring small gardens based on five different perennials. After a year of writing, a year of photography, and a year of production, Five-Plant Gardens is finally at the printer, and we hope to see advance copies of the finished product in a few weeks.

In the meantime, the publicist for the project came up with the idea of having some bloggers who are not (yet) obsessed gardeners give one or more of the plans a try and report back on the results. So, if you follow any great bloggers who you think might like to be lured into the wonderful world of perennial gardening, I’d be glad to pass along any leads to the folks at Storey. Thanks!

And last, but absolutely not least…

← Seed Giveaway Wrap-Up
Picture This – On the Spot →

It’s much too early to plant watermelon seeds here in PA, but I can play with them, at least. Aren’t these seeds of ‘Cekirdegi Oyali’ amazing? They’re from @southernexposureseed #beautifulseeds #cekirdegioyali
As seen on today’s walk. Should I be concerned about what sort of bees the neighbors are keeping, that such a warning is necessary? May need to find a different route once the weather gets mild again. #bewareofthebees
Seeds of Brazilian bachelor’s button (Centratherum intermedium). I’m always intrigued by the way these fit together perfectly. #beautifulseeds #centratherumintermedium #centratherumpunctatum